Share All sharing options for: Rivera Wants A Fourth Year 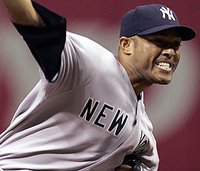 The main reason the Yankees have yet to announce the Mariano Rivera signing is because Rivera is holding out for a fourth year. To me, that is ridiculous. Although he put up a good year going 3-4 with a 3.15 ERA and 30 SV, it was his highest ERA since 1995, his rookie season, and the most hits given up since 1996. He is still a solid fielder, but the numbers he is asking for and what it comes out to makes me think the Yankees were pressured to do the right thing with Rivera:

I averaged out the last 11 seasons and came up with the following:

Using those averages as expectations for the 2008 season, Rivera will be paid:

I think Rivera still has one, maybe two good years left in him, but to pay him that much for three years will only hurt them. They have solid young relievers who could take the closer spot next year. What the Yankees should do is hold strong on their offer, maybe offer a mutual option, and see what he does. It would not surprise me if ends up taking the three year offer when he sees that no team is interested in giving him a four year deal.