A-Rod Reaching Out to Yankees

Share All sharing options for: A-Rod Reaching Out to Yankees 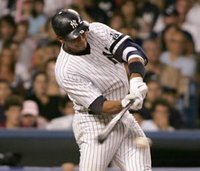 It may not be over yet between A-Rod and the Yankees. Several of the major sports news outlets are reporting today that A-Rod is rethinking his decision to play elsewhere next year. He has initiated the talks and the Yankees appear receptive on two conditions: that A-Rod lower his demands stated by his agent, Scott Boras from $350 million by 50-75 million and that Boras not be present at any negotiating meetings. I'm not very surprised by this. I think a lot of teams were saying that he should lower his price and now he is going back to the team that might only pay him 28-30 million dollars. It wouldn't surprised me if the Yankees offered the same 10 year deal, worth 252 million dollars. Although no player is worth that, A-Rod did get it once and could probably take it again. I think the main reason A-Rod might be going back to the Yankees to talk a contract is to save face. Even if he doesn't sign, at least he gave them some respect. Rodriguez looks so bad in the public eye right now that he is hoping that the Yankees may be able to save his image as a true professional, at least somewhat. It appears that the Yankees do not want to trade away their young talent, and will just throw out more money. A-Rod, who will probably be the AL MVP, has drawn some interest from the Dodgers, Angels, and Giants.