Royals Move To Plan B

Share All sharing options for: Royals Move To Plan B 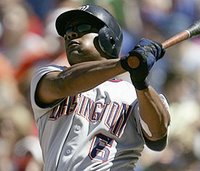 The Royals missing out on Hunter is not necessarily a bad thing right now. They can spend about seventy million, and plan to go hard for power hitting outfielder Jose Guillen. Guillen batted .290 this season with 23 HR and 99 RBI in 153 games. He is just thirty-one, and will probably command a three year deal, worth 30-40 million dollars. In 22 games at Kauffman Stadium, Guillen has batted .367 with 2 HR and 18 RBI. Those numbers would look pretty good after 81 games. His price is expected to go up though because he is also getting pursued by the Giants, Cubs, Rangers, and Mets. If they can sign him for a under 40 million, it gives them the option to also go after a pitcher, maybe Carlos Silva. They are looking into Hiroki Kuroda, but he prefers to stay on the West Coast. Silva has pitched in the AL Central his whole career, so switching to the Twins might be something he is interested in, but only if they get a power hitter as well. They have a chance to be a solid team in that division, and will probably influence who makes it to the playoffs next season. Silva is 3-1 with a 3.75 ERA in 6 games at Kauffman Stadium giving up five homeruns. Personally, I think Silva is better off going to the NL, but he will probably go to the highest bidder. The Braves, Mets, Mariners, Phillies, and Cardinals are all interested in Silva and willing to overpay to land the best pitcher left on the market.