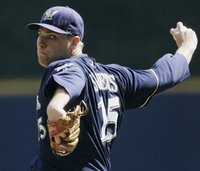 The Mets are interested in landing a big name starter; but might now want to give up too much to acquire one. The perfect fit right now appears to be the Brewers, who have starting pitcher Ben Sheets. The Brewers have a lot of depth in their rotation right now and could afford to trade Sheets, especially because he has one year with eleven million dollars on his contract. But because he has had some injury problems the past three seasons failing to start over 25 games, they probably can't get as much. Nevertheless, Sheets was 12-5 this season with a 3.82 ERA and 106 K in 141.1 innings, so he can still pitch and be effective. If the Brewers are looking for prospects in return, I expect them to inquire about Francisco Pena, son of Tony Pena Sr. He is a young catcher who has a lot of potential and is considered to be the next catcher for the Mets. However, if they get one player in return, they might be able to snag one of the Mets outfielders, but only if they pay most of his contract. I suspect they would ask for Carlos Gomez. Mets GM Omar Minaya will probably look to big name players before falling back on Sheets, but I think that is his best bet.