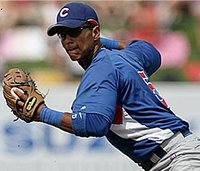 Shortstops are hard to come by this offseason and you can expect more trades this offseason. Let's start with the Braves. The Braves traded Edgar Renteria to open the spot for Yunel Escobar, but now they are looking for another shortstop, and one to backup Escobar. I'm not sure many teams are looking to shop backup infielders, but I'm sure you could find one. Escobar is young, so they will not be trading for a young, promising short stop to take the spot in a year or so. It would be a stretch to say that they would trade for infielder Ronny Cedeno, who has been primarily a backup after struggling in 2006. One option is Ramon Vazquez of the Rangers. He batted .230 with 8 HR and 28 RBI in 104 games with the Rangers. This seems like a good to me. Vazquez can play several positions in the infield and the Rangers are actively looking to make trades. They have good relations with the Rangers, and could acquire a young prospect or two. Other options include Ramon Martinez, Jamey Carroll, and Jeff Keppinger.

The Devil Rays prefer defense at shortstop, and are inquiring about Pirates shortstop Jack Wilson. Wilson has been the subject of several trade talks with other teams, but nothing has happened. The Devil Rays seem like a good fit. They could send two or three prospects, maybe Brendan Harris to bring him in. Wilson was pretty solid offensively though, batting .296 with 12 HR and 56 RBI and made 11 errors in 640 chances. Other teams expected to be interested include the Cardinals, Nationals, and maybe Blue Jays.