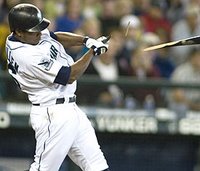 Despite recent reports stating that Jose Guillen bought performance-enhancing drugs, there is still interest for him. The first teams that have stated their interest are the Royals, Mets, and Orioles; however, it appears that the Cubs will join the race looking at Guillen as a fallback option if they miss out on Kosuke Fukudome. Guillen would be great in the Cubs outfield though. His offensive numbers and solid OBP would give the most potent offense in the National League. This season, Guillen batted .290 with 23 HR and 99 RBI, so expect him to receive a pretty good payday. The Cubs are looking to move Jacque Jones and have held talks with the Tigers, Marlins, and Astros about a possible trade. Because the Cubs and Tigers are so adamant about not going after A-Rod, they have found common ground in needs and wants and could swing a deal. We will find out more next week with Kosuke Fukudome because he is still in negotiations with his team in Japan, but if he signs with the Dragons, expect the Cubs to make an aggressive offer to Guillen.