Mike Sweeney is free agent this season and it is likely the Royals will not keep him. They have Billy Butler who is ready to take over and have other pressing issues beyond Sweeney. Not only is his power down, but the Royals are looking to take a new direction, and Sweeney is not involved in their plans. I think Sweeney will draw interest, but probably at a one year, incentive based deal. He has health problems that have limited him to 134 games over the past two seasons, and his power has been declining as well. I expect teams the Giants to be interested Mike Sweeney since Ryan Klesko is likey to hit the market. Beyond the Giants, the Yankees might look at a one to two year deal for Sweeney while first base prospect Juan Miranda develops. The Rangers would like to move Saltalamacchia back to catcher and if they cannot trade for Millar, could sign Sweeney at a low cost. I think Sweeney is capable of hitting .270 with 15 homeruns, he just needs to be healthy.

Sosa might be done?: Sammy Sosa filed for free agency and said he wants to play in 2008, 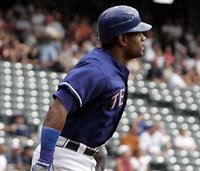