Tony Clark To A's or Giants?

Share All sharing options for: Tony Clark To A's or Giants? 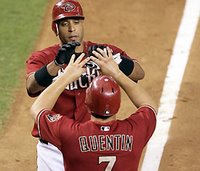 According to MLB Rumors Correspondent Steve Wilson, Diamondbacks negotiations with Tony Clark have turned even more south. There were reports earlier this week that said negotiations were at a minimum, and it seems they have come to a standstill. The Diamondbacks are simply unsure if they want to trade Connor Jackson or Chad Tracy, putting Clark's role with the team in question. Personally, I do not understand why they would trade Jackson. Clark would definitely like to be a starter, so he will probably look to the market for a starting role while continuing talks with the D'backs. The Athletics have been bringing in veteran free agents to fill their DH void over the past couple years and may look to do it again with Clark. Mike Piazza was not what they hoped for and is a free agent, so they will let him walk. Although they have Jack Cust, the A's may look to trade him while his interest is high for a couple young players. Clark would probably improve as a designated hitter despite his age, and could also work with Daric Barton at first base. Other than the A's, I expect the Giants to make a call. Ryan Klesko is a free agent and is expected to walk, so Tony Clark would be a great stop gap as they wait for Travis Ishikawa to develop. Another possibility for Clark is to see him return home to Kansas City, but Clark had the opportunity to sign there back in 2004, but chose the Diamondbacks. Clark batted .249 with 17 HR and 51 RBI this season for the Diamondbacks, but is a career .265 hitter with 244 HR. Clark, 36, could probably command a two year deal, worth 3-5 million dollars annually, a modest contract that a team like the A's could take on.

Giants entertaining offers for Lowry, Sanchez: The Giants are looking to trade one of their pitchers for a package of prospects or major league ready players, but are not interested in trading Lincecum or Cain. Noah Lowry did have a pretty solid year for the Giants and is just 27. I'm sure they can afford to unload him and worry about the repercussions. As for teams interested, the Phillies, Indians, Rockies, Mariners, Cubs, White Sox, and Cardinals are all looking for pitchers through trades, and have prospects that could suit the Giants. As for Sanchez, he is young and has a lot of upside, but I see him traded later next season once he can get his value up.