Share All sharing options for: Twins Interetsed in Tony Clark? 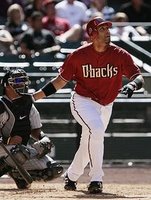 The Twins have joined the race for veteran switch-hitter Tony Clark. Clark, 35, hit .249 with 17 HR and 51 RBI last season with Arizona, and according to GM Josh Byrnes, Clark was a big part of the Diamondbacks run to the postseason. Clark is looking for an everyday job, and will probably leave for a DH spot. According to MLB Rumors Correspondent Steve Wilson, the Athletics, Rangers, Royals, and Twins are all interested in Clark, but are looking at a one year deal with an option. That seems fair because Clark saw a drop off in numbers from last season and should be willing to take that to prove himself. However, his power does fit the Metrodome and his attitude would be great for the clubhouse. Other than Clark, it is believed that they are interested in Sammy Sosa, but only if his price comes way down.