Share All sharing options for: Twins Next CF - Coco Crisp 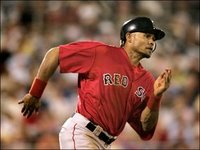 Now that Torii Hunter has left and the Twins are basically in ruins, they will probably trade Johan Santana. The Red Sox, who not only have the money to spend but seem willing to give up prospects seem to be the most likely. The Twins probably want lefty Jon Lester, so with him, they could send Coco Crisp, Kyle Jackson and a couple other top prospects. I see them doing whatever they can to hold onto Jacoby Ellsbury, but I wouldn't be surprised if he is in the deal. The Red Sox traded top prospect Hanley Ramirez who is now an All-Star in Florida. However, no one seems to miss him, probably because they got Josh Beckett and Mike Lowell in return. The Twins think high of Crisp, and from what I am hearing, are asking for Jacoby Ellsbury, Jon Lester, Michael Bowden, and Lars Anderson in a trade for Johan. Anderson is a first baseman who draws comparisons to Adam LaRoche. He batted .288 with 10 HR and 69 RBI in Singe-A and is just twenty. Bowden, 21, is probably a year away but will be very effective. I fully expect Crisp to be traded, and see the Twins as their best suitor. Other than them, the Cardinals, Cubs, Padres, and Rockies to be other options. Something will probably get done soon after the Winter Meetings. It will allow the Twins to find out who is interested, and then talk with those teams in the weeks following.

UPDATE: The Twins are entertaining the idea of signing either Kenny Lofton or Corey Patterson to play center. I think Patterson would be a great option. Not only does he have speed, but he is a pretty decent fielder with the potential to have a good bat.