White Sox Close In On Hunter

Share All sharing options for: White Sox Close In On Hunter 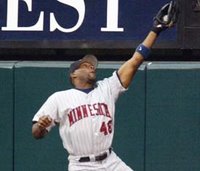 The White Sox and Torii Hunter are closing in on a deal that could be finished by the end of the week. Hunter has met with the White Sox at least twice in the last two weeks, and it is believed the second time was to go over financial details of a possible detail. One source said that "the climate" was that a deal could get done very soon. According to MLB Rumors Correspondent Brady Yu, Torii Hunter is eager to get a deal done before Thanksgiving and plans to get something done today or tomorrow. By adding Cabrera and Hunter, they will have improved their offense and defense, and will give the White Sox the rest of the time to improve pitching. There has been no indication how much Hunter is set to make, but I would assume that it is at least a five year deal making 13-16 million dollars annually.

Brewers, Kendall Close: The Brewers are working on a deal with Jason Kendall, according to sources. The plan is to get a deal done by the end of the week in order to start shopping Johnny Estrada, maybe to the Mets or Pirates. It is possible to see Ronny Paulino brought in to platoon with Kendall, but a deal with the Mets seems more likely.