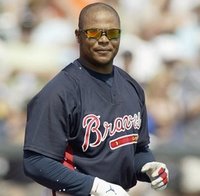 According to MLB Rumors Correspondent Shane Shapiro, the White Sox are making a big push for Andruw Jones. Although they have interest in Aaron Rowand, they prefer Jones because he is an excellent fielder and is slightly less reckless than Rowand. The White Sox had an offer ready for Torii Hunter, but since he signed with the Angels, I believe they will offer that same deal to Jones. Also, he has heard the Dodgers, Giants, Padres, and Athletics are also interested in Jones, who is seeking a multi-year deal. Jones batted .222 with 26 HR and 94 RBI, but did win a Gold Glove and put up similar power numbers to Rowand and Hunter. He is represented by Boras, so you can expect lengthy discussions and a deal probably reaching 100 million. Personally, I see the Dodgers leading the race because not only are they looking for an outfielder, but they have money to land him. Also, Jones is very good friends with former teammate and Dodger shortstop Rafael Furcal.

Park Returns to Korea: Shane Shapiro is also reporting that Chan Ho Park will void his contract that he recently signed with the Dodgers and return