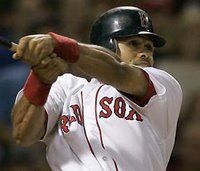 According to the Chicago Sun-Times, Aaron Rowand is not interested in joining the White Sox. They exchanged figures briefly before the White Sox saw that he was out of their price range. I guess that is why Torii Hunter is now with the Angels. The White Sox have talked briefly with the Red Sox about a trade, but I think it will pick up at the Winter Meetings. Kenny Williams is very familiar with Coco Crisp because he has done very well against the White Sox, and at U.S. Cellular Field. In 31 games. Crisp has batted .286 with 6 HR and 17 RBI and is just 29. Crisp is in need of a change of scenery after the Red Sox basically handed his spot to Jacoby Ellsbury in the playoffs. He has speed, a solid glove, and the potential to hit about .290. Not only that, but he played four seasons in the AL Central with the Indians, so he is very familiar with the pitchers in that division.