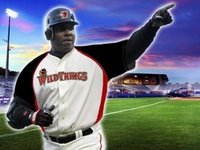 Now that teams can negotiate with players outside their organization, it comes as no surprise that Barry Bonds receives an offer. It is just not who you think it is from. Today the Washington Wild Things of the Frontier League offered Bonds a contract with a base salary, loaded with incentives. "He will have the opportunity to meet certain bonus levels based on breaking any Frontier League single-season offensive record," explained GM Vecchio. Incentives include breaking the homerun record (35), RBI record (100), Base on Balls (85), and breaking the record of any other offensive category. This could turn out to be a very lucrative deal if Bonds can put up another good season, and it would give Bonds a chance to return to Pennsylvania, where his career began. His deal also gives him king-sized room on road trips, 50% of profits on sales of his gear, and a host family for Bonds if needed. Other than the Wild Things, I expect the Angels, Mariners, and Twins to be interested.