Share All sharing options for: Wood Getting More Interest 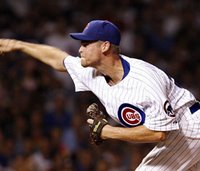 Although the Cubs are making signing Kerry Wood a priority, the more teams that state their interest publically, the less chance the Cubs have of signing him while they have exclusive negotiating rights. Personally, I think Kerry Wood will return to the Cubs. He loves Chicago and knows the Cubs have been good to him while he has been injured. However, the Rangers, Reds, and Tigers are expressing interest as a reliever initially, but ultimately to put him back in the rotation. Interesting, especially because if the Cubs don't offer that too he will probably walk. The Rangers make the most sense though. Wood is from Irving, Texas and they could offer him a spot anywhere in the rotation or bullpen. Wood was 1-1 this season with a 3.33 ERA in 22 games, but his history of injuries will probably bring him an incentive laden contract.

Cubs after Kaz Matsui?: According to the Denver Post, the Cubs are preparing a big offer for Kaz Matsui. This means two things: The Cubs will move Jacque Jones and put Mark DeRosa in right field or they will move Ryan Theriot and try Matsui at shortstop. Personally, I am against the signing of Kaz Matsui. I think it is a ploy in attempts of signing either Kosuke Fukudome or Hiroki Kuroda. They simply do not have room for him unless they plan on not playing Matt Murton or Jacque Jones. However, Some suggest Ryan Theriot is not capable of holding an everyday job, and the Cubs might realize that this season. I for one, disagree. I believe Theriot is one of the best situational hitters in the National League and is capable of playing several positions successfully. Aside from Matsui, the Cubs plan to go for Carl Crawford, Kosuke Fukudome, Hiroki Kuroda, and possibly David Riske, but it has not been confirmed yet.