Share All sharing options for: Yankees Eye Third Base Replacement 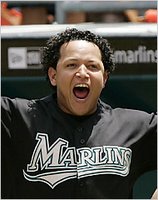 The Yankees are preparing for life without Alex Rodriguez and are examining all options. Many players are available including Scott Rolen, Miguel Cabrera, Miguel Tejada, Hank Blalock, and Joe Crede. There has been speculation that the White Sox would acquire Johnny Damon for Joe Crede, but recent reports suggest they are more interested in Miguel Cabrera. Cabrera will definitely cost them. The Marlins are looking at both Phil Hughes and Melky Cabrera, and that is just a start. They might be able to get Eric Duncan as well, along with a solid young reliever. Cabrera, 24, batted .320 with 34 HR and 119 RBI. He has already won a World Series and is a career .313 hitter with 138 HR. He is definitely the best option because he is young and is someone that can be locked up for the next ten years. On the other hand, his growing weight problem might be a bigger problem in New York. Miguel Tejada will likely be traded this off season and the Yankees may be interested. He has experience playing against the AL East and in Yankee Stadium so adjusting would not be a problem. He is also willing to make a switch to third base and is under contract till 2009. He would not cost as much as Cabrera, and once his contract is up Miguel Cabrera is on the market so they could always take him. I do not doubt the Yankees will land something big-it is just a matter of when and at what cost.