Share All sharing options for: Yankees Third Base Situation 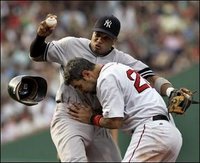 A lot of people have been asking what is happening in New York and for now, all talks are premature. The Yankees are focused on getting something done with Mariano Rivera, and from what I have heard, they have made him a three year deal worth 45-47 million dollars. As for teams they have talked to, they have talked with the Orioles, Marlins, Dodgers, and White Sox, and I assume that they will look to Miguel Cabrera first. Cabrera will definitely cost them, probably Melky Cabrera and several other prospects. After Cabrera, 24, they will probably look to Miguel Tejada, who would have to make a switch to third. But by playing in the same division it should not be too hard. Joe Crede would not cost them too much because he is coming off an injury but I think they want someone bigger than him. One surprising option would be to bring in Nomar Garciaparra from the Dodgers and platoon him with Wilson Betemit. Although I think this is a bad move, they would only have him for one year and then they could let him walk and look to add someone like Troy Glaus.

The Red Sox failed to sign Mike Lowell before the deadline, allowing him to negotiate with other teams. The Yankees said they would look into signing him, but I'm sure his agents, who also represent Jorge Posada, will look to get the same deal they got for Posada, which might turn the Yankees off to the thirty-four year old. We will see what happens over the next couple weeks, but I expect them to see if Lowell is interested before exploring these trades.