Share All sharing options for: Yankees, Twins Slow Talks Down 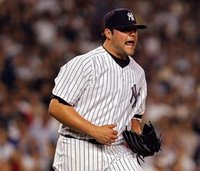 The Yankees and Twins have begun negotiations involving Johan Santana. "It's preliminary right now." Hank Steinbrenner told the AP. Santana, who has a full no trade clause, will be 29 in March and has told the Twins to start taking offers for him. Obviously, the Yankees see Santana's value. He is a lefty whose numbers would only improve playing for a team like the Yankees, and the Yankees have the money to lock him up for the next five years. The Twins could probably acquire three or four legitimate prospects in return, while also shedding some cash. The Yankees, Mets, Dodgers, and Red Sox are the four teams that are most interested, but it will probably come down to the Yankees and Red Sox. Both teams have prospects to offer, and could afford to not only lose prospects, but to add Santana's salary to their payroll. They are still far apart, because the Twins are looking to land Robinson Cano in the deal, but may have to settle for a package including Joba Chamberlain, Melky Cabrera, and another prospect. Not a bad deal, but we will see what happens. Personally, I think the Red Sox have a better offer ready, but I do not think they are as willing to trade their prospects. We will see what happens next week at the Winter Meetings.