Yankees Will Include Hughes

Share All sharing options for: Yankees Will Include Hughes 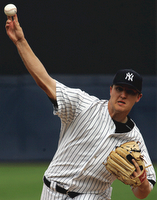 The Yankees plan to include Phil Hughes in the deal that would bring Johan to Santana to the Yankees for Melky Cabrera and Jose Tabata, according to the New York Daily News. Personally, I think the Twins would have been smart to try and get two of their better pitchers, like Ian Kennedy and Jeffery Marquez, along with Cabrera and Tabata. You then acquire four potential studs to lead the Twins in a new direction. Whichever trade goes down, whether it is with the Yankees, Red Sox, or Dodgers, the Twins are definitely the winners. Not only do they acquire a boatload of potential All-Stars, but they are avoiding a big contract on their payroll for the next several years. I'm sure this trade will get done during the Winter Meetings because it looks like the Twins would like to prepare for the 2008 season as soon as possible.