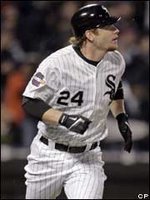 The Angels continue to shop Chone Figgins in hopes of landing a third baseman. I do not know why they feel the need to trade Figgins, but if they can get something in return they might as well. It wouldn't surprise me if the Tigers tried to make a move. They could have Figgins play left field, and move Jacque Jones to a back up outfielder. They could package Brandon Inge, Yorman Bazardo, and whatever top prospects they have left for Figgins. But I doubt the Angels would have Inge over Figgins. There are not too many teams shopping third baseman right now, so they might be stuck. Hank Blalock, Scott Rolen, Miguel Tejada are all available, but Figgins is healthier and better. A possible scenario would be to see the White Sox trade Joe Crede and a minor league prospect for Reggie Willits. They could then have Figgins play sort of as a utility player, splitting time around the infield and outfield. That would probably limit him to under 400 at-bats, but it would give them the third baseman with power that they are looking for. And it would open up some room in the outfield for the Angels. Not only that, but it gives the Angels a very good trade chip at the trade deadline. Tony Reagins told me the Angels are not done this off season, and I wouldn't be surprised if they went out and made another big move.