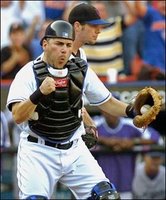 A lot of you have been asking about the Blue Jays lately so I made a point of it to talk with GM J.P. Ricciardi. I asked him about the short stop situation and if any of the young guys will be getting a shot at shortstop in 2008, and he said:

"No, not this year. We have some really good young shortstop prospects, but they are a couple years away."

The Blue Jays bullpen was one of the best in the game this season, and you can never have too much pitching, so I asked him if they would look to reinforce the 'pen even more:

"You know you can never have too much pitching, but I think we will look in-house on this one." Although Alex Rios is on the trading block, I wanted to see if the Blue Jays were having him work on anything to improve upon those numbers:

"Well, if you look at his numbers, he has gotten better every year," he said. "He is starting to get comfortable and trust his swing. You know he is a young player that keeps getting better-" Finally, I wanted to know if the Blue Jays were planing to make a run at any catcher: "Yes. We are working on it right now." Paul Lo Duca maybe?

Here are some other things I heard before I left for the evening:

- Although it is not confirmed, the Tigers might look to trade Dontrelle Willis and Ivan Rodriguez to the Mets for Brian Schneider, Phil Humber, Fernando Martinez, and Aaron Heilman. Those names are not being thrown around at the moment, but it is a possibility. Personally, I think the Tigers should absorb the money by bringing in these players and make a run at a World Series.

- The Rockies are closing in on a three year deal, worth 30 million dollars with Aaron Cook.

- The Padres are looking into the idea of signing David Eckstein. They have also signed Glendon Rusch.

- The Orioles have contacted the agent of Tadahito Iguchi suggesting they are moving closer to a trade involving Brian Roberts. The Cubs are known t be interested, and could offer up Rich Hill and Eric Patterson and still be in good shape, if not better, for 2008.