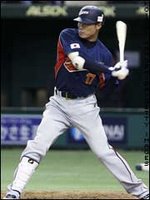 According to a source who asked to remain nameless until a deal is finalized, the Cubs have signed Kosuke Fukudome. The amount is not known, but it definitely helps the Cubs in their search for an outfielder and a lefty. I suspect Fukudome will bat second or fifth, but nonetheless, it gives the Cubs a very potent lineup. How it effects the Padres remains to be seen, but it wouldn't surprise me if they go after Aaron Rowand or make a trade for Raul Ibanez or Jason Bay. What does this mean for the Cubs? This means they may look to trade Matt Murton, but on the free agent search, they are probably done. They have several prospects that will fill in in the bullpen and their bench is pretty much set. Here is how their lineup is shaping up:

With the impending sale of the team, dishing out a deal that is worth 50 million is pretty good. Personally, I did not expect much from the Cubs, but they fooled many with this deal.

Check out my article on Fukudome and his potential in the MLB.

UPDATE: According to the San Diego Union Tribune, the Padres were informed they were out of the bidding for Fukudome.