Share All sharing options for: Brewers Looking, But Waiting Patiently 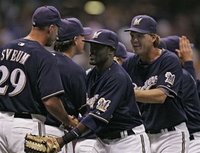 The Brewers have holes in their lineup and continue to try and make moves, but are not as willing to trade pitching to get an outfielder or third baseman. They have approached the Cardinals, Rangers, and Dodgers about trades, but have not made progress: "Somewhere along the line, we've got to make a call on it," said Melvin. "I'm getting a little bit less of a feeling that a trade will happen." However, with several pitchers remaining on the market, and the Brewers plethora of pitching, it would make sense the Brewers would make a trade to fill one of their holes. The Cardinals are interested in Kyle Lohse, but if they are unable to land him, they may approach the Brewers about a similar pitcher, Chris Capuano. That could reopen talks for Scott Rolen. The Cardinals have made it clear they plan to rebuild, and they may make another step in trading away disgruntled third baseman Scott Rolen. The Mariners are expected to be big players in the hunt for Carlos Silva, and may look for a trade if they miss out. Because the Brewers have good, young pitching, they might be able to pull Raul Ibanez away for a pitcher or two. So as teams prepare to make big offers, probably around three years, thirty million, the Brewers are listening and preparing offers for teams that miss out.