Share All sharing options for: Cardinals Still Hot For Tejada 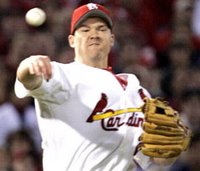 Despite signing Cesar Izturis, the Cardinals still plan to explore a trade for Orioles infielder Miguel Tejada. The Orioles are desperately shopping Miguel Tejada because he is unhappy with the direction of the team, and could look to swap big contracts in a deal. The Cardinals have been the most interested in Tejada since the off season began, so I bet the Orioles would start with them. I'm sure the Cardinals would have to part with a low level prospect as well to land him because Rolen was not impressive after coming back from injury. Nonetheless, adding Tejada to your lineup and having him play third base will help that team. Tejada is set to make thirteen million for the next two seasons while Rolen is set to make twelve for the next three. However, where will they play Melvin Mora? Mora is also unhappy with the Orioles but has said he is practicing in the outfield and has played around the infield in years past. It is possible we could see them put Huff out in the outfield, move Mora to designated hitter, and sign David Eckstein to play shortstop while Rolen plays third. If this trade does happen, the Cardinals would still have money to go after a pitcher or two.