Share All sharing options for: Clemens' Stock Is Falling 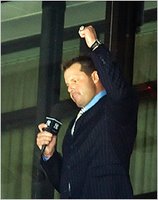 When Roger Clemens was named in the Mitchell Report, almost everyone assumed that he was guilty. And although he continues to come out and deny it, the media will still think he is guilty. The first effect came today when the President of the Texas High School Baseball Coaches Association said he is rethinking allowing Clemens to come and talk about his workout plan. What will happen next? If he does not come out and say he used it briefly or file a lawsuit will people start dropping him as a sponsor? Will he be inducted into the Hall of Fame? It is scary to think that the best pitcher of nearly two decades is now being accused of using performance enhancing drugs.

With the Mitchell Report coming out and Roger Clemens not doing much to deny it or embrace that he made a mistake, it makes it more likely that pitchers Greg Maddux, Tom Glavine, John Smoltz, Curt Schilling, and even Mike Mussina will get a look for the Hall of Fame before Clemens does. Personally, the way I thought of Roger Clemens has changed. I once thought of this elite pitcher, who was a modern day Nolan Ryan, someone I never saw pitch. But now, I still look at him as a great pitcher, but as someone who doesn't has as much respect for the game as someone like Nolan Ryan did. I don't know, maybe that is too harsh. In the court, it is innocent until proven guilty. But in the baseball word, I've gotten the impression that it is guilty till proven innocent. I think baseball fans will treat him the same way they now treat Mark McGuire and Barry Bonds.

Let me know how your thoughts have changed on Roger Clemens.