Share All sharing options for: Clement Prefers Closer To Home 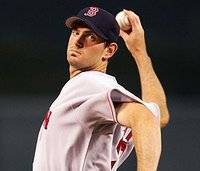 Free agent pitcher Matt Clement was drawing a lot of interest because he would be coming at a cheap price. However, Clement has narrowed his choices to teams closer to his home in Pennsylvania. The teams that are the most obvious destinations include the Indians, Phillies, Nationals, and Pirates. Clement made over thirty starts for seven straight seasons, so he is reliable, but did not pitch in 2007. If he does stay close to home, I think he would probably choose the Pirates or Phillies, if they are interested. I know the Pirates are interested, and have heard they have made a non-guaranteed offer, but it will probably take something guaranteed. Other teams that are interested in the pitcher include the Cardinals, Diamondbacks, Blue Jays, and Rockies.