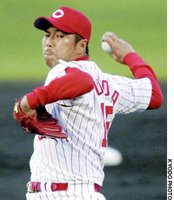 The Dodgers and Hiroki Kuroda have agreed to a three year deal, worth between 36-40 million dollars, according to sources. The deal is pending a physical, which has reportedly been done, so an official announcement is expected within the next hour or so. With this signing, it gives the Dodgers another big starter, who will probably be in the number three spot. By adding a solid pitcher and a free agent outfielder in Andruw Jones, without giving up any prospects, they are gearing up for a long run behind Joe Torre.