Share All sharing options for: Expect Minor Moves From Rockies 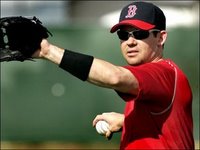 The Rockies have always been a low budget team that tried to build up its prospects. That idea will not change this offseason, even though they made it to the World Series. They are looking into the possibility of bringing in Mark Loretta, who is waiting to hear from the Rockies before signing elsewhere. Also, pitcher Brett Tomko has told the Rockies he is very interested in pitching for them, but hasn't gotten too much interest in return. They will arrive in Nashville tomorrow in hopes of finding a suitor for Brian Fuentes, probably a team willing to trade a number three or four starter. I do not think they are ready to try out any of their young pitching prospects, so a veteran stop gap will be nice. It is hard to say who is willing to deal pitching for a reliever, so I expect this trade to happen under the radar. The Rockies are shaping up for another playoff run, but they are not going on a spending spree to do so.