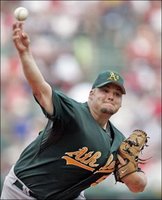 According to major league sources, the interest Haren received has made the Athletics more willing to trade Joe Blanton. Although they are not desperate to trade him, they have been talking to teams about a trade. From what I am hearing, the Mariners, Mets, Royals, and Cubs are all interested in trading for Blanton. I doubt the Mariners would unload three or more prospects to someone in their division, and I do not think the Royals are in any place to trade their prospects, as they too, try to rebuild. The Royals also have money available in trying to land Carlos Silva, which they seem more interested in doing. The Mets have been interested in Blanton for awhile and might be willing to trade a package that includes Phillip Humber, Kevin Mulvey, and a pair of minor league position prospects. The Cubs have reportedly been looking for an elite American League pitcher and might be in talks with the A's for Blanton. They have the prospects, and a trade for a solid pitcher would definitely put them on top of the Central. A package that included Sean Gallagher, Eric Patterson, Donnie Veal, and maybe Matt Murton would be a start. They might look for Tyler Colvin in the deal, but the Cubs are not interested in trading him, like they are not interested in dealing Donnie Veal or Jeff Samardzjia. I the Athletics will find a suitor, whether it is the Mets or someone else, they will find one. It wouldn't surprise me to see the Indians jump in. GM Mark Shapiro told me before the off season that they are looking for pitching, and with the recent addition the Tigers made, I think they would love to add another legitimate pitcher. We'll see what happens, but don't be surprised if a trade happens in the next week or so.