Share All sharing options for: Giants Waiting On Rowand 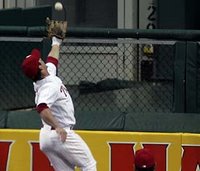 The Blue Jays are still waiting to hear from the Giants on if they will accept their Alex Rios for Tim Lincecum deal, but the Giants are still deciding. I have heard from a major league source that the Giants are in talks with Aaron Rowand, and we'll see what he is looking for before they tell the Blue Jays. Rowand is looking for a five year deal worth about 80 million dollars, and I think it would surprise a lot of people if GM Brian Sabean spends that kind of cash after the amount he spent last year and the results he got. However, they are desperate for an outfielder and do not have any prospects ready to play everyday. Nate Schierholtz might be ready towards the end 0f the 2008 season, but it seems more likely that he will take over in 2009. Manager Bruce Bochy told me that Rajai Davis and Randy Winn will be in the outfield next year, so Rowand would probably play left, unless they move Davis to left. Rowand does not have much experience at AT&T Park, but in seven games has batted .286 with 0 HR and 5 RBI. Personally, I think Rowand would not be a smart signing on the Giants part. Although he is just thirty and coming off a career year, he is very reckless in the outfield and injury-prone. Before the 2007 season, he batted a career .280 and averaged 11 homeruns with just 43 RBIs. They finished in last place last season and have not finished over .500 since 2004. They let Barry Bonds walk this season and are entering a new age in a new direction. They should be looking to trade for young players and try to reestablish themselves in the division.

If I were the Giants, I would make the Lincecum for Rios trade. Although you are trading a great young player, he has not proven himself just yet, and Rios has established himself as a solid outfielder. They are sort of locked on Ray Durham, but will be looking for a new shortstop next season, and should be trying to make another trade for a third baseman, maybe Hank Blalock. Every team is taking big strides in that division and if the Giants do not make some, they will be hung out to dry for the next several years. I think some Giants fans would disagree with me, but great teams are built from the ground up, and that is what they need to do to return to the team they were back in 2002.