Share All sharing options for: Inge to Pirates Unlikely 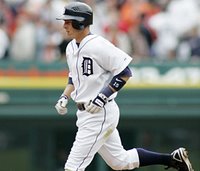 The Tigers have shopped Brandon Inge to teams over the past couple days and have struck up talks with the Pirates. However, the Tigers would probably look for a reliever in return and the Pirates are not willing to trade them. Inge's spot was taken by newly acquired third baseman Miguel Cabrera and Inge has told the Tigers he wants out. Inge batted .236 with 14 HR and 71 RBI in 151 games, and has averaged a .241 AVG with 85 RBI and 359 RBI since 2001. I think the Tigers will continue to shop Inge in hopes of finding a major league player more suited to a back up role, but might have to settle for a low-level prospect. Other teams that might be interested include the Dodgers, Phillies, Marlins, and maybe the Rays.