Is Ethier Odd Man Out?

Share All sharing options for: Is Ethier Odd Man Out? 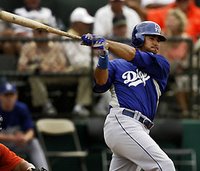 It appears with the Dodgers signing of Andruw Jones, there is more interest in Andre Ethier than Juan Pierre. That makes sense though. Ethier had better power than Pierre and is much cheaper than him. Not only that, but Ethier has potential to build upon his power, especially in a stadium like Arlington Ballpark. The Rangers are just one of many teams beginning to show interest in the outfielder, who could probably net a reliever and a solid young prospect in return. Ethier batted .284 with 13 HR and 64 RBI in 153 games for the Dodgers, and is just 25. The Dodgers have reported interest in Joaquin Benoit and might be able to snag Gerald Laird in the deal as well. Other teams that have reported interest include the Rays, who would like to fill a spot in their outfield. I do not think the Rays want to give up too much, so I think it will probably stop at that. Another team is the Cubs, but only if they cannot sign Kosuke Fukudome or trade for Raul Ibanez. Ethier is a lefty who could play right field and bat at the bottom of the order. However, he isn't he high OBP player the Cubs are looking for so they might look elsewhere too.

Going back to the Jones signing, I was surprised how little it was talked about. The reporters I talked with mentioned it briefly, even Ned Colletti sort of avoided the subject when I asked him about it. I do not know if there is something behind it, but I was surprised how no one talked about it. He was the best player to hit the market this year and is just two years removed from his 50 homerun season.

As for other trade talks involving Bedard and Santana, it seems the Yankees are waiting to see if the Twins can make a deal with one of the other teams before moving back in. Surprise, surprise. To be honest, I doubt either trade gets done this off season. Talks are moving to slow and teams keep pulling out and then asking for more. It just seems that progress cannot be made right now. I guess we will have to wait and see.