Mariners Close In On Silva

Share All sharing options for: Mariners Close In On Silva 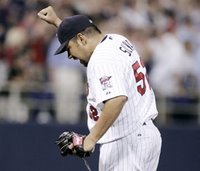 According to FOXSports.com, the Mariners are closing in on a four year deal with Carlos Silva. If you read my last couple of posts concerning the Mariners, I have kept saying that they are looking to land a big pitcher. Silva is there guy, but I wouldn't say he is the best pitcher to go with. Although Silva is going to a team that hit .20 points higher as a team with 35 more homeruns, his K/9 rating was 3.97, the lowest of any A.L pitcher, so to have to hold on to him for four years, seems like they are little desperate. However, he has had success at SAFECO Field going 3-1 with a 3.18 ERA in 28.1 innings. I think Silva would have been smarter going to an NL team, but the Mariners are more willing to cough over the cash, and I think he will be whole lot of the same pitcher, making more money then a lot better players. I think this falls under one of the worst signings of the off season, for now, and we will see if Silva can break out now that he is with a better team. Personally, I expected the Mariners to make a big trade rather than sign someone for that money. They spent the money on Jarrod Washburn two years ago and he has only struggled, so you would think they would play smart with their cash and save it for next year when better pitchers like Johan Santana, CC Sabathia, or Brad Penny.