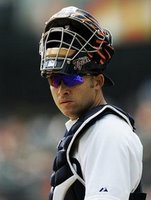 When the Marlins acquired Mike Rabelo, they fully expected him to be their starting catcher. Although I am not sure why, Rabelo should work well with the young pitchers on the staff. He has always been known for his ability to call games, but has lacked power and the ability to hit for a high average. In 573 minor league games, he has hit .263 with 18 HR and 229 RBI. Initially, I wanted to compare him to Jason Kendall with a slightly lower average, but now I am thinking Yadier Molina. We'll see, maybe he will come through, but I do not think he will be the Marlins catcher for the future. The Marlins also have a hole at third base, and have reportedly been talking with former Angels third baseman Dallas McPherson. McPherson did not play in 2007, but would make a good stop gap for a season or two while prospect Chris Coghlan develops. In 81 games at Low-A, Coghlan, 22, hit .325 with 10 HR and 64 RBI. He struggled in his call up to High-A, but is expected to begin there next season. Personally, I think a trade for Wes Helms would be a better move, but the Phillies have high demands. I fully expect the Marlins to make a move to land a third baseman, but if your a Marlins fan, it probably won't be the most elite player.