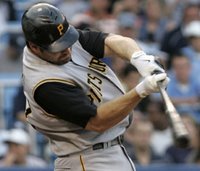 The Pirates plan to unload Xavier Nady before the December 12th deadline, but I'm not sure why. He batted .278 with 20 home runs and 72 RBIs and made only 2.15 million dollars. Not only that, but he can be controlled by his team for the next two seasons, through arbitration. However, the team that has him has little hope of keeping him past 2009 because his agent, Scott Boras, usually has his clients test the market. And, his price should go up in arbitration. From what I am hearing, the Rangers are both interested in Nady to play outfield, along with the Orioles. You can rule out some of the low budget teams looking for outfielders because Nady's price is going to get high. I do not think anyone will trade for him because the Pirates will probably just release him and go with some of their young outfielders than just pay him. Then teams will go after him for and offer him about three million dollars for one year. If the Pirates unload Jason Bay to the Indians, the Pirates might hold onto Nady for at least one more season. I'm sure we will know more next week after the Winter Meetings.