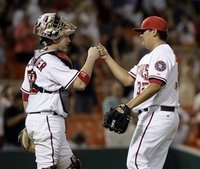 This time last year, many were expecting the Nationals to finish with at least 100 losses. However, they put together a solid year with what they had and got 73 wins. Now, they have added three up and coming prospects in Lastings Milledge, Elijah Dukes, and Tyler Clippard, and signed catcher Paul Lo Duca. It is possible we could see them get close to 80 wins, that is, if their new acquisitions live up to expectations. They hope Zimmerman can improve on his numbers, but it might not be enough if they do not have pitching.

The Nationals new ballpark, which is set to open this April, looks very nice, but will probably not benefit its pitchers because of its spacey gaps, and short distances in the corners. I think the best way for them to land a pair of solid pitchers would be to trade Chad Cordero, but both the Astros and Brewers turned down trades. They do not have any prospects that could really bring anything at the moment through trades, so if they cannot land Cordero, I think they would be smart to take a chance on a pitcher coming off a poor year. Pitchers like Mark Prior, Kris Benson, Bartolo Colon, Byung-Hyun Kim, or Jaret Wright would be solid pick ups, and could potentially help their young, and inexperienced rotation. The Nationals are expected to open the season with a payroll around 40 million dollars, and could afford to add a free agent pitcher or two named above. I think the Nationals have the potential to be a pretty good team, not playoff bound just yet, but a team that can definitely compete.