News and Notes: Prior To Get Big Contract?

Share All sharing options for: News and Notes: Prior To Get Big Contract? 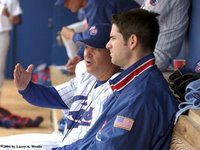 Mark Prior knew what he was doing when he left the Cubs because instead of making a little less than 3 million dollars, he is expected to get a big pay day. I am not sure why, but teams are looking for pitching and if they can land someone who put up 18 wins just a couple years ago, they will do it and hope he can recover. A report said that eleven teams had expressed interest so I called around and was able to get a couple more teams beyond the Padres, Yankees, and Mets. The list includes the Mariners, Rangers, Cardinals, Phillies, Astros, Nationals, Reds, and Indians. I'm not sure who I consider the front-runner, probably the Padres, then the Reds, then the Yankees or Mets. I think the Reds have a good chance because Mark Prior had a good relationship with Dusty Baker, the Reds new manager. I'm sure he will sign in the next couple of weeks, and it should make for a pretty big story when he does.

Mariners very serious about Bedard: I've been saying it since the beginning that the Mariners are going to make a big splash, and we'll see if they can follow through. It would probably cost them Brandon Morrow and either Adam Jones or Yuniesky Betancourt, or both.

Jenkins likely heading to Philly: I talked today with a former Phillies executive who told me the Phillies have had their eye on Jenkins for awhile, so look to them to close in on him.

Diamondbacks plan to shop Orlandon Hudson?: Since the Diamondbacks acquired Dan Haren, they have two potential big contracts in their rotation that leaves little room for Hudson.

Pirates still hot on Barrett: The Pirates still have interest in Michael Barrett and are willing to offer up two prospects for him.

Benson workout "successful": I talked with the agent of Kris Benson who told me that "there were at least twenty scouts on hand. Kris threw very well, about sixty pitches. I can't speak for any teams, but he had a successful workout which showed that he was healthy and we are confident that he will sign."

Javy Lopez back with Braves: The Braves signed Javy Lopez to a minor league deal and invited him to Spring Training.