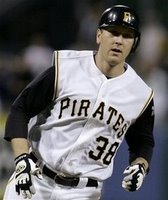 The Padres are eying a corner outfielder after missing out on Milton Bradley, according to sources. They have been in talks with the Astros over Luke Scott, and have approached the Pirates about Jason Bay. However, I am hearing that the Padres are interested in reopening talks with the Cubs about Mark Prior and Matt Murton. This would probably be only if the Cubs land Kosuke Fukudome, and if the Padres feel Murton can play everyday. Murton has great power and could probably handle an everyday job, but his numbers might not fair well at PETCO Park. I see a more likely deal involving the Astros. By trading for Luke Scott, they would not have to give up prospect Matt Antonelli, who plays second base, but probably a pair of low-level prospects. Jason Bay would be a great pickup for the Padres, but if any trade happens, he is probably going to Cleveland. The Padres plan will probably change in the next 24 hours, most because Kosuke Fukudome's decision is expected tonight or tomorrow.

Rockies Eye Eckstein, Vizcaino: The Rockies are eying David Eckstein, which might suggest that Tadahito Iguchi may be looking elsewhere. Eckstein would be a solid pickup for the Rockies, who would probably have him play second base. It would give them a new lead off hitter and someone with even more playoff experience. After losing LaTroy Hawkins and still no word from Jeremy Affeldt, they have reportedly made an offer to Luis Vizcaino.

Dodgers, Giants Making Moves: The Dodgers are reportedly showing interest in Brandon Inge, and are willing to offer a pair of minor leaguers. Inge would probably platoon with Andy LaRoche at third base, but probably not have a full time job. The Giants are also talking with Luis Gonzalez and Shawn Green about possible one year contracts. You would like to see them go after something younger, but they will wait till next year when the market features outfielders Vladmir Guerrero and possibly Carl Crawford, but probably not.

Yankees willing to part with Mussina?: The Yankees have been approached by at least two teams concerning Mike Mussina, according to major league sources. One of the two teams, is the Phillies, who could use Mussina like they did Moyer and extend his career at least one more year while playing in the weaker NL. I'm sure the Yankees would be interested. Not only would it give them a chance to add a pair of prospects and clear some cash, but they have no spot for Mussina in the bullpen.

Diamondbacks Serious About Haren: The Diamondbacks have made a very big offer to the Athletics for Dan Haren, according to sources. The deal is believed to include top Diamondbacks prospect Carlos Gonzalez, along with Emilio Bonifacio and Brett Anderson. I think the Athletics may try to drop Emilo Bonifacio and try and two lesser prospects that the A's feel can still help the team. If any deal does get done, expect it to get done before the holidays.