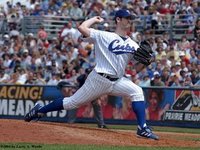 Padres GM Kevin Towers has confirmed that the Padres are very interested in trading for Mark Prior. Prior is neighbors with Kevin Towers and are good friends. Not only that, but Prior has made it known that he would like to pitch for the Padres. The Cubs have until Dec. 12 to offer him a contract but might look to trade him at the Winter Meetings. The Cubs are very intrigued by the prospects they could acquire in return for Prior, and have already started looking. The Padres hope Prior would be more agreeable in contract negotiations because he is a native of the San Diego area, and because he has only pitched in 57 games over the past four seasons. The Cubs inquired about second baseman Rayner Contreras, pitcher Wade Leblanc, and left fielder Chad Huffman, all solid prospects with good upside. They will probably bring back Barrett next week as well look for a new outfielder. I think the Cubs have had enough of Prior. They have put so much time and effort into him and nothing has come out of it. They have pitching now and do not need him, unless they wanted another candidate for closer. Prior isn't even expected back until June, if then.