Share All sharing options for: Pettitte Admits HGH Use 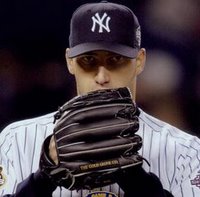 Today, Yankees pitcher Andy Pettitte admitted to HGH use during the season of 2002 while on the disabled list: "If what I did was an error in judgment on my part, I apologize," Pettitte said Saturday in a statement released by his agent. "I accept responsibility for those two days." Although he never used steroids, it is hard not to notice his stats for 2002 and 2003. Despite the injury, he combined to make 48 starts going 34-13 with a 3.64 ERA and 277 K. The following year, he only made fifteen starts. There was no rule against it at the time, and the time of his use was brief and for healing purposes, supposedly: "This is it — two days out of my life; two days out of my entire career, when I was injured and on the disabled list," he said. "I wasn't looking for an edge. I was looking to heal." The Yankees came out and supported Pettitte, which likely means that he won't get suspended. Also, I think many will respect Pettitte's decision to come out and admit a mistake, and then move on. With Pettitte coming out and admitting it, some may examine Clemens' career more closely, mostly because they shared the same trainer. We see a jump in his stats while in Toronto, while just two years before he failed to make 25 starts.

Personally, I think they should all come out and apologize. The sooner Baseball can get this behind them, the better off everyone will be. It was not illegal at the time, and you could argue that nearly everyone was doing it. I just think they would be embraced by the baseball world if they came out and admitted their mistakes and moved on, rather than deny it until more facts come out. I don't no, maybe I am asking too much, but it just seems it is time to put this era behind us.