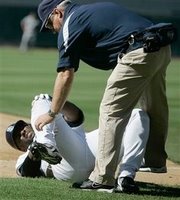 The Texas Rangers have reached an agreement with outfielder Milton Bradley, according to FOXSports.com. Bradley will probably be their designated hitter early on because of his injury, meaning the Rangers will not be bringing Sammy Sosa back. Bradley was coached by now Rangers manager Ron Washington, which could have played a factor in his signing. This season, Bradley batted .306 with 13 HR and 37 RBI with the A's and Padres. As the Padres miss out on another outfielder, it makes it more likely that they will increase their offer to Kosuke Fukudome, whose opted to play in the States.

A lot of people have been asking about the number one pick in the Rule 5 Draft, Tim Lahey. I emailed expert Jim Callis who told me, "[He's got a] Big arm, not terribly consistent, could be a middle reliver but he'd benefit from some more time in the minors."