Share All sharing options for: Reds Serious About Bedard 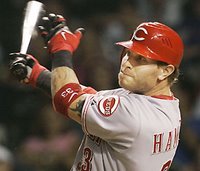 I recently talked with a well placed source inside the Orioles organization who told me that the Reds are very serious about Bedard and would like to get something done before the holidays. The Reds have the players to trade, and seem willing, except in a trade involving Jay Bruce. I believe the kind of deal that would have to get done would be a deal like Homer Bailey, Josh Hamilton, and a prospect like Travis Wood or Derrik Lutz. I think the Reds should make this deal, regardless for how many players they ask for. Obviously, if it goes higher than five or six legitimate players, than they should back out, but acquiring Bedard would make them a contender in the division behind two shaky teams, the Cubs and Brewers. The Reds do fairly well against both teams and have several emerging stars in Joey Votto, Brandon Phillips, and Jay Bruce. They do not have any chance without Bedard because their rotation is nothing past Harang and Arroyo. Bedard was 13-5 with a 3.17 ERA, and 221 strikeouts in 182 innings. You put that in front of Harang, who was 16-6 with a 3.73 ERA, and 218 strikeouts in 231 2/3 innings, you are a much better team and you take more stress of the bullpen. Bedard is also drawing interest from the Yankees, Dodgers, and Red Sox, who do have better prospects. but if the Reds can overwhelm them, I would not be surprised if it went through.