Share All sharing options for: Thoughts On Mitchell Report 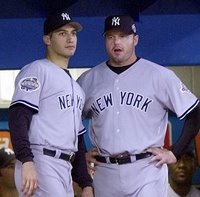 One of the biggest days in baseball history has come and gone, and I think a lot of people are disappointed with the results. While some were expecting more of the big name players, some were expecting that they were would be some tentative plan for the future. At least I was. I was also expecting Commissioner Bud Selig to have at least read through the Report before making it public. There is a lot more to it than the average fan thinks, even though some just care about the names on the list.

As for the players, I was not surprised to hear some of the names. However, I was surprised that Roger Clemens and Andy Pettitte would be mentioned, when all the evidence they had was their training saying he recalled it. And, Clemens supposed use was well before drug testing began. I was surprised to hear Eric Gagne on the list, but the other names, like Gary Matthews, Paul Byrd, Rick Ankiel, Troy Glaus, and Jason Giambi, have all been mentioned before. And of those names mentioned above, they will likely not be disciplined because their reported use was before drug testing began in 2003.

As for teams, a lot of players on the list came from the 2000 World Series Champion Yankees. Nothing can be done now, but one could argue they had an unfair advantage. Also, I wonder how teams will treat a player on their team if he was named. Or the players. Does this end a career for a player like Jerry Hairston Jr., someone who has never been an All-Star? Finally, will the fans treat any one player different? Again, I think the better the player is, the less repercussions there will be, but we will see.

"Many players are named. Their reputations have been adversely affected, probably forever, even if it turns out down the road that they should not have been," Donald Fehr said. What Don Fehr said is probably the biggest effect the report will have. How does it change the reputation of Roger Clemens? How does it change the reputation of clean pitchers, like Greg Maddux, who sort of came up behind these pitchers. Better yet, how does it change the face of Mike Mussina, a teammate of both Clemens and Pettitte who has started to decline but has always been pretty consistent. Time will tell how these players are accepted by fans as we try to move away from the Steroid Era, but questions will always surround the players mentioned in the report.

Leave me a comment on what you think about this whole issue...