Twins In Talks Over Nathan, Too?

Share All sharing options for: Twins In Talks Over Nathan, Too? 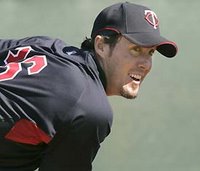 The Brewers plan to have David Riske setting up games for whichever closer they can land, whether it is Eric Gagne or Joe Nathan. They plan to start with Joe Nathan in hopes of prying him away from the Twins. It will cost them though because Nathan was dominant yet again for the Twins. The Brewers would probably have to include Rickie Weeks, along with Carlos Villanueva, and maybe another prospect. I do not think that is too much to ask for. Second base is the easiest position to fill on the field. They could easily sign David Eckstein to play second base and then they are a much better team. They have enough pitching to part with Villanueva, and Weeks has not been all that impressive in his time with the Brewers, but has shown improvement. If the Brewers want to push into the playoffs above the Cubs and Cardinals, they will need to improve their bullpen and look to sign an outfielder.