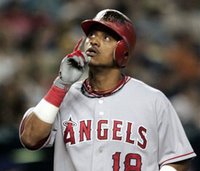 Just weeks after trading P Jon Garland to the Angels for Orlando Cabrera, the desperate White Sox are not interested in going long term with Cabrera, and are looking to trade him. There are not too many teams I see taking him, but it is possible the Red Sox might be interested. Orlando Cabrera did well with the Red Sox in 2004, batting .294 with 6 HR and 31 RBI in 58 games. The White Sox are looking for a middle infielder like Julio Lugo and are interested in Coco Crisp and might be able to snag both in the Red Sox are willing. Obviously some cash would have to be exchange, but it seems like a fair deal considering the Red Sox have Ellsbury, and Lugo struggled in Boston. I've been talking with a Cubs fans through email who asked me if the Cubs are looking at any shortstops. It is possible they would look at Orlando Cabrera, but highly unlikely. Ryan Theriot did great for the Cubs all year, just struggled in the final weeks of the season. Lou Piniella talked about Theriot as a great situational hitter, and to have that kind of player in the lineup who also comes at a reduced price, definitely helps the team.