Share All sharing options for: Athletics Next Move: Trade Kotsay 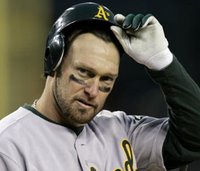 According to the Atlanta Journal-Constitution, the Braves have been in contact with the Athletics about a trade involving Mark Kotsay, which would suggest that he is the next player the Athletics plan to move. I do not know how much they can get for him though. He batted just .214 with 1 HR in 56 games and is making eight million dollars in 2008. However, he is a career .282 hitter and has averaged about eleven homeruns in nine years as a starter. Kotsay is a very good defensive center field who could work with Jordan Schafer as he gets ready to play everyday in 2009. In a trade, the Athletics would probably make sure the Braves cover most of the salary, while the Athletics net two to three young prospects. Another positive in acquiring Kotsay is that he has experience at Turner Field, having hit .292 with with 2 HR in 30 games. Other than Kotsay, they do have some interest in Corey Patterson, but are turned off to the idea of Crisp because he has a two year commitment and they are looking for a stopgap.