Share All sharing options for: Baseball Tonight or San Diego? 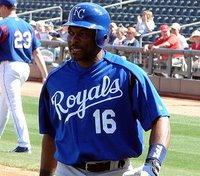 Free agent outfielder Reggie Sanders will be trying out for a gig on Baseball Tonight, according to his agent Michael Powers. I didn't know there was an opening, but either way, it doesn't change my view of the show. I think it is great to have player commentary on Baseball Tonight, and I hope you guys enjoy that here through the interviews. Anyways, Reggie Sanders has been in talks with the Dodgers and Padres about a reserve role and it seems the Padres are the most likely fit. Although Kevin Towers has said he plans to explore the market for a young player who they can have control over for awhile, it is likely he will add a veteran like Sanders to a minor league pact. In 24 games last season, he batted .315 with 2 HR and 11 RBI. Sanders played with the Padres back in 1999 and had a fairly good year, so I think fans would embrace a return, even if it is in a minor role. He said he will make a decision by the end of the month on whether or not he will continue playing so stay tuned.

Several Players Signed: Jose Bautista of the Pirates, Brad Lidge of the Phillies, Ryan Madson of the Phillies, Jonny Gomes of the Rays, Matt Treanor of the Marlins, Marcus Thames of the Tigers, Huston Street of the A's, and more avoided arbitration today. However, it appears Chien-Ming Wang will be heading to arbitration.