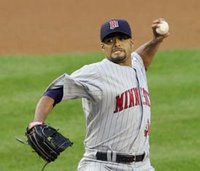 The Mets have acquired pitcher Johan Santana for pitchers Kevin Mulvey, Delois Guerra, Phil Humber, and outfielder Carlos Gomez. The Mets have been given a 72-hour window to get a contract extension signed, and Santana is expected to be asking for twenty million dollars annually over five to seven years. What I expect to happen is the Mets give Santana a five year deal worth 20 million dollars annually, with incentive based options added on. Because the Mets won Santana, it makes me think that the Red Sox and Yankees pulled out of the running. Their offers were much better even if they were for less players. The Twins acquired four highly unproven players in this deal and probably won't be ready until 2009 or 2010. Although this is rebuilding for the Twins, I do not see this really helping like it has for the Athletics and Marlins. Santana was 15-13 with a 3.33 ERA last season for the Twins, but a switch to a run producing NL team with a solid bullpen should do wonders for his numbers. He is entering his prime, and although it is always a risk to lock up pitchers long term, this trade puts the Mets back on top in the NL East.