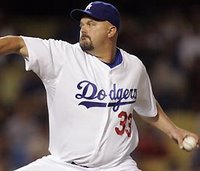 After the signing of Matt Clement, the Cardinals continue their search for another starter, preferably a left hander. Although numbers have not been exchanged, I have heard there is some interest in lefty David Wells, only if he is willing to take an incentive-laden contract. They are very excited about Matt Clement and the experience he brings to the table, but would love another veteran in the back. I heard before the holidays that there was also interest in Odalis Perez, along with Eric Milton, but only if they would take a similar one year deal, loaded with incentives. Personally, I think the Cardinals are going about this the right way. They have the money, and several young pitchers who are still developing, and could make a run at the division if their pitchers come back strong. I do not know if it will happen, but it is certainly something to watch for in 2008.