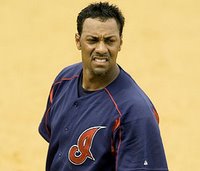 The Cardinals are working on a deal with Two-time MVP Juan Gonzalez that would give him one more chance at a comeback. Gonzalez has been working out in Puerto Rico and all his workouts have reportedly gone well. "He looks great, like he hasn't missed a beat. His legs look strong. Once a hitter, always a hitter." Said Eduardo Perez, the founder of the complex where Gonzalez is training. I think it is a good signing on the Cardinals part. It has low risk, but high possibilities. Gonzalez could make for a solid bench player if he has been working out like everyone says. However, his last at-bat was in 2005 and his last hit came in 2004, so a comeback is iffy. If they are looking to sign a veteran outfielder they are better off trying to sign Sammy Sosa, who is now desperate to land somewhere.